Senshi Sosho, the official Japanese history of the Pacific War 1941-45, provides the following evidence of Japan's hostile plans for Australia in 1942:

"The pressing issue of strengthening policies was discussed at the Imperial Headquarters-Government Liaison Conference on 10 January 1942...With regards to Australia (including New Zealand), the following was determined: 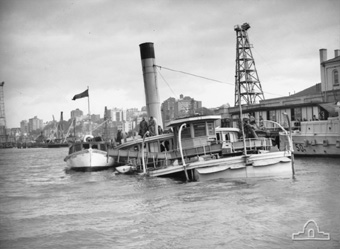 Japan brings death and destruction to the tranquil beauty of Sydney Harbour. The Australian Navy barracks ship,
HMAS Kuttabul lies on the bed of Sydney Harbour after a Japanese midget submarine attack in 1942.

The proposal to commemorate the Battle for Australia 1942-43 was initiated by then RSL National President Major General W. B. Digger James AC, MBE, MC and me in a series of letters and discussions that began in July 1997. At that time, I was Honorary Counsel to the Victorian Branch of the RSL, adviser to the RSL on public affairs, and a member of the RSL State Executive.* That proposal was endorsed and strongly supported by Mr B. C. Ruxton, AM, OBE, President of the RSL Victorian Branch.
* RSL is an abbreviation for Australia's largest veterans' organization The Returned & Services League of Australia.

We were aware from research by the distinguished Japan scholar and historian Professor Henry Frei* that the major Japanese offensive against Australia that began with the Battle of the Coral Sea (7-8 May 1942) had two purposes. The first was to sever Australia's lines of communication with the United States, and thereby, deny the Americans access to Australia as a base from which they could launch a counter-offensive against Japan. The second purpose was to deny American support to Australia and compel Australia to surrender to Japan. At the time of the Battle of the Coral Sea, Australia had already ignored two demands for its surrender made by Japanese Prime Minister General Hideki Tojo in the Diet in January and February 1942. See Frei at page 172.

* Author of the definitive work on Japan's hostile plans for Australia in 1942 "Japan's Southward Advance and Australia" (1991) Melbourne University Press.

What became the Battle for Australia was not contemplated by the Japanese high command as part of the First Operational Stage of Japan's campaign of military conquest that began with Pearl Harbor on 7 December 1941. Australia was included in the Second Operational Stage at the behest of Vice Admiral Shigeyoshi Inoue who was commander of the 4th Fleet, or South Seas Force, based at Truk in Japan's Caroline Islands League Mandate. Admiral Inoue was responsible for absorbing and defeating an expected American counter-offensive against the Japanese-held Marshall and Caroline island groups, but he warned the Navy General Staff of the grave danger that Japan would face if the Americans were allowed to establish bases in Australia and its New Guinea Territories for their inevitable counter-offensive. Inoue urged an offensive against Australia and the British Solomons to counter this danger. Inoue's arguments were accepted by Navy General Staff. See the chapter "Before Pearl Harbor, Japan targets Australia's New Guinea Territories". To counter the perceived threat from Australia as an American ally, the admirals of Japan's Navy General Staff and Navy Ministry wanted to invade key areas of the northern Australian mainland in early 1942 to isolate Australia from American and British aid. To invade Australia, the Japanese Navy would require troops from the Japanese Army.

The generals of the Japanese Army General Staff, and the Prime Minister of Japan, General Hideki Tojo, appreciated that Australia posed a serious threat to Japan while it remained an ally of the United States. However, when the Japanese Navy requested troops for an invasion of Australia at a meeting of the Army and Navy Sections of Japan's Imperial General Headquarters on 4 March 1942, the generals refused. They had a different but equally sinister plan for bringing Australia under Japanese control. The generals felt that their army resources had already been heavily overextended by Japan's rapid and massive territorial conquests, and that the Imperial Army needed time to consolidate its territorial gains. The Japanese Army was confident that Australia could be pressured into surrender to Japan by isolating it completely from the United States as part of an intensified blockade, and by applying intense psychological pressure. The Japanese plan to sever Australia's lifeline to the United States was given the code reference "Operation FS" (also known as "FS Operation").

By 7 March 1942, the Japanese Navy and Army had agreed that severing Australia's lifeline to the United States (Operation FS) and pressuring Australia into submission to Japan were more important objectives than the limited invasion of Australia's northern coast that the Navy had earlier proposed. At the Imperial General Headquarters Liaison Conference on 7 March 1942, the Navy General Staff and Navy Ministry agreed to their limited invasion proposal being deferred in favour of the Army plan to sever Australia's lifeline to the United States and then pressure Australia into surrender to Japan. Planning for an invasion of Australia was not dropped at this Liaison Conference. It was agreed that invasion planning would be referred back to Navy and Army headquarters for further study.

On 15 March 1942, with Emperor Hirohito's approval, Japan's military high command formally resolved to implement Operation FS by extending Japan's southern defensive perimeter from Port Moresby in the Australian Territory of Papua to Fiji and Samoa in the South Pacific for the purpose of isolating Australia from the United States. Port Moresby, Fiji, and the islands between them (the British Solomon Islands, the New Hebrides, and New Caledonia), would be heavily fortified by Japan and equipped with forward air and naval bases. The waters between each island fortress in this chain would be guarded by the Japanese Navy. A tightly enforced Japanese blockade would sever Australia's lifeline to the United States and prevent military support (including troops, equipment, oil, metals, and rubber) reaching Australia from the United States and Britain.

Japan's Prime Minister, General Hideki Tojo, and his generals, believed that the severing of Australia's lifeline to the United States produced by Operation FS, together with an intensified blockade and increased psychological warfare, would act as a Japanese noose to "throttle Australia into submission" to Japan. See Frei " Japan's Southward Advance and Australia".

Operation FS was Japan's top strategic priority in the Pacific until the Doolittle carrier raid on Japan (18 April 1942) caused equal strategic priority to be given to the total destruction of the US Pacific Fleet. When the Japanese Navy suffered a crushing defeat at the Battle of Midway (3-5 June 1942), including the loss of four of Japan's best fleet aircraft carriers, the Japanese lost their naval supremacy over the United States Pacific Fleet. Lacking the ability to project naval power as far across the Pacific as Fiji and Samoa, Operation FS was cancelled on 11 July 1942. However, the strategic objectives behind Operation FS were not cancelled. After the Japanese defeat at Midway, the Japanese high command believed that Japan's top strategic priority in the Pacific was to sever Australia's lifeline to the United States and deny the United States access to Australia as the springboard for a counter-offensive.

The capture of Port Moresby and Guadalcanal were to be the initial stages of revised Japanese strategic operations against Australia that no longer extended further east than the British Solomons. The cancellation of the ambitious Operation FS was not intended to reduce the pressure on Australia to surrender to Japan. The capture of Port Moresby and Guadalcanal would enable the Japanese to intensify dramatically their existing blockade of Australia. Longer range air bombardment of the Australian mainland could be undertaken from Port Moresby, increased submarine attacks on Australian coastal cities and shipping could be launched from Port Moresby, and Japanese bombers based on Guadalcanal could strike more effectively at Australia's vital shipping lifeline to the United States.

The US Navy strategy in the South-West Pacific in 1942 was primarily directed to preventing the Japanese occupying Australia, its New Guinea mainland territories, and the southern Solomon Islands in order to preserve them as bases from which the United States and Australia could launch counter-offensives against Japan.** Control of access to Australia was considered vital by both the Japanese and Americans in 1942, and both were determined to prevent the enemy gaining that access.** The Battle of the Coral Sea was initiated by the Japanese in early May 1942 to gain control of Australia by implementing Operation FS. The Kokoda Campaign was initiated by the Japanese in July 1942 to gain control of Australia by implementing the revised Operation FS, now known as Operation MO. On 7 August 1942, the US Navy initiated the Guadalcanal Campaign to block Japanese control of the southern Solomon Islands which would threaten American lines of communication with Australia.

A challenge to the Battle for Australia from Dr Peter Stanley

After reading Dr Peter Stanley's three essays on this theme, I formed the view that his denial of the gravity of the Japanese threat to Australia throughout 1942 and his attacks on the character and leadership of Prime Minister John Curtin lacked any credible historical foundation and largely stemmed from inadequate knowledge of the Pacific War, and in particular, a failure by him to appreciate the grave strategic situation facing Australia throughout 1942. I also formed the view that Dr Peter Stanley did not have a sound grasp of the structure and functioning of Japan's military high command and its strategic aims and war planning in 1942 that would enable him to evaluate correctly its hostile plans for Australia.

I formed the view that Dr Peter Stanley's research was both superficial and deeply flawed. Dr Stanley appeared not to have read (or understood) the official Japanese history of the Pacific War Senshi Sosho, or the published research by leading Japan scholars and historians such as Professor Henry Frei, Professor John J. Stephan, and Professor Herbert P. Bix. Dr Stanley's controversial revisionism now appears to rely on nothing stronger than his argument that the really significant battles that decided World War II were fought over his English homeland, on the continent of Europe, and across the Soviet Union. I have provided my reasons for reaching these views in the chapters beginning "Challenging a denial of the Japanese threat to Australia in 1942 promoted by Dr Peter Stanley".

In seeking to deny that there was a Battle for Australia, in the sense of control of access to Australia, Dr Peter Stanley appears to have no appreciation of the very important strategic considerations that shaped the course of the Pacific War from January to December 1942.