BOMB DAMAGE IN THE TOWN OF DARWIN

On Thursday, 19 February 1942, the population of Darwin was only about 2000. Most of the women had been evacuated to the south as Allied armies in South-East Asia succumbed to Japan's apparently invincible soldiers and Darwin came within range of Japanese warplanes based on forward airstrips in conquered areas of the Dutch East Indies. Australia's military leaders had given little serious thought to the defence of Darwin, believing that it would not be seen as a threat to Japan. They were wrong. 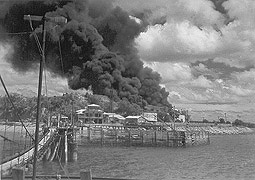 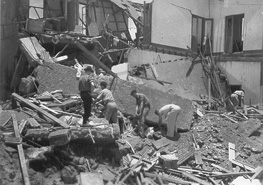 Darwin's post and telegraph complex received direct hits from Japanese bombs on 19 February 1942. The Postmaster and nine of his staff, including six women, were killed by the blast. 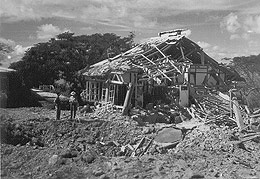 A Japanese bomb dropped during the first air raid on Darwin produced this crater in the grounds of Government House. The Administrator, his wife, and staff were sheltering under the building when the bomb exploded, and caused the damage shown here. A female staff member was killed by the bomb.